Kea are the only alpine parrot, and are one of the most intelligent birds in the world. Named for their loud call that sounds like ‘Kee-Ah.’

A very mischievous bird, this is the parrot which is known to damage parked cars (and any other property that has been left out in their home territory of the South Island) with their very strong beaks.

They were hunted from 1860 to 1971 due to a government bounty as farmers believed kea were attacking sheep, which a few opportunistic birds may do. Around 150,000 were killed before full protection in 1986.  Sadly, some kea are still being intentionally killed today.

Threats: Some of their main threats are being hit by cars on South Island roads, predation by introduced pests such as possums and stoats, and reduced availability of natural foods.

How to help Kea: If you spot kea in the South Island, be sure not to feed them, no matter how cute they seem. Close your vehicle's doors and windows and keep a close eye out in carparks so that you don't run them over.

Find out more about them on the Kea Conservation Trust website.

Kea are mainly vegetarian, living in alpine areas of the South Island. Due to their harsh environment, loss of habitat and curious nature, kea are attracted to human settlements where they can easily access our high energy foods. Less time needed to find food naturally means wild kea have more time to get up to ‘mischief.’ Most of our food is very unhealthy for kea, and some foods are also very toxic to them. 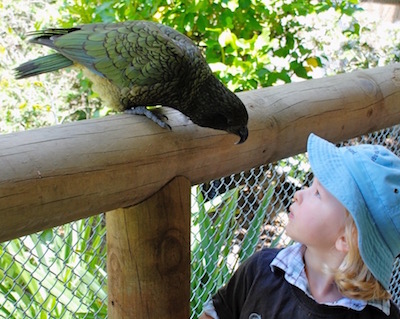 At Paradise Valley Springs you can meet our friendly kea in their walk-through enclosure, providing up close encounters and great photo opportunities. 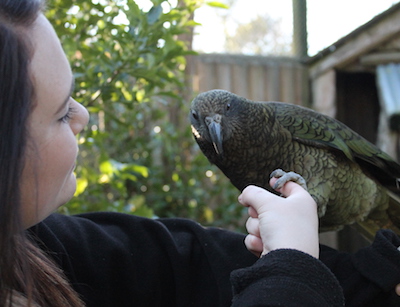 We feed our kea every day at 3pm, and you're welcome to come along and learn all about them. 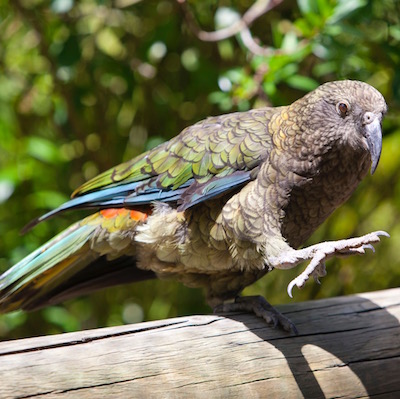 Our only female kea, with a silver leg tag on her left foot. You will notice her beak is shorter and not as curved as the males, one of the few but not always reliable ways to tell male and female kea apart. 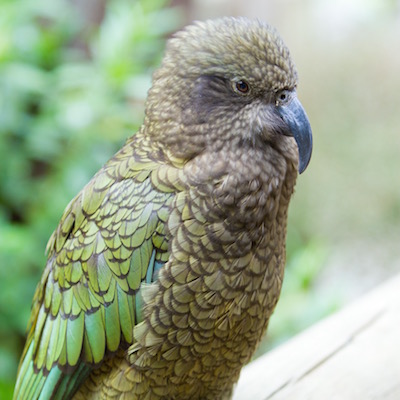 Louie is a very confident and cheeky bird. He loves to be the centre of attention, and often pushes the other kea aside. Louie is a quick study and loves learning new things at training sessions, which are done to help keep their minds stimulated. 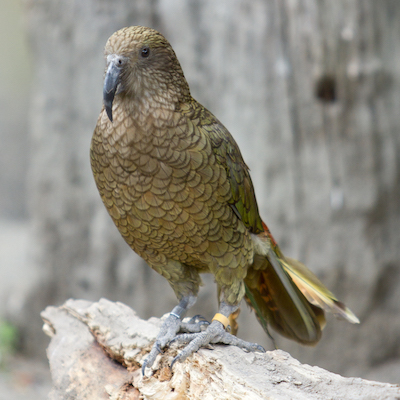 Ollie has been with us since 2010 and was initially very shy, but has since found his place and become much more confident. He came to us not being able to fly due to chewing his own flight feathers, probably due to him having arthritis. Even though he feels better, the habit is still with him. Since he is not the best flyer we installed a cat door so he doesn't have to fly over any high barriers. 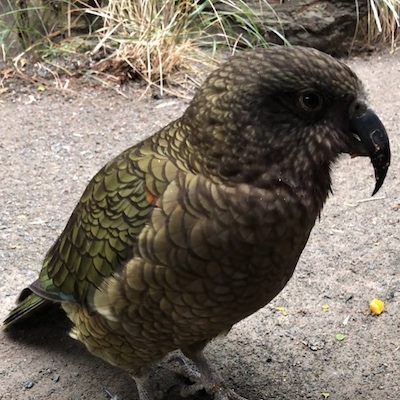 Rory came to live at Paradise in 2018 from a private breeder. Even though he hadn't lived with other birds for several years he didn't take long to become part of our small flock. Being a lot younger than the other kea, he asserted his dominance fairly quickly and is now pretty high in the social hierarchy. Over time he has begun to participate in behavioural training sessions with our staff. Initially Rory was too shy to participate, but began learning some new training behaviours just from observing the other kea.