The Dama or Tammar Wallaby (Macropus eugenii) is among the smallest of all wallabies and is native to South and Western Australia.

They were introduced into the wild in New Zealand in 1838 and are found around Rotoruas' lakes after being released there in 1912. Some have been reintroduced to areas of Australia where they had been previously eradicated.

Wallabies are marsupials that carry their young in their pouch - for approximately 250 days, and joeys continue to drink from their mother until up to a year of age.

Wallabies are a big pest in New Zealand as they eat our native vegetation, forestry plants as well as pasture. They have slowly spread throughout the Bay of Plenty and into the Waikato region, and numbers are on the increase.

It is illegal to keep a wallaby as a pet in New Zealand.

If you've seen a wallaby, dead or alive, report it here 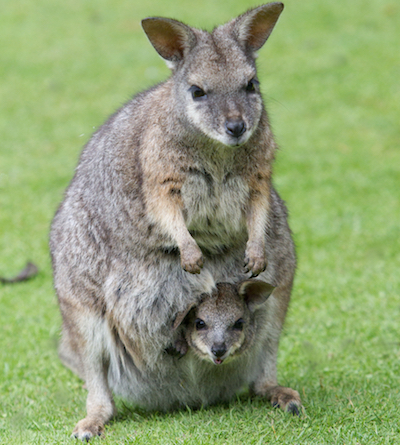 Get up close and personal with our Dama Wallaby family. Pat and hand feed these gentle little animals.