Hidden amongst beautiful native bush on the edge of the Mamaku Ranges is our Rainforest Treetops Walk.

The solid wooden boardwalk is up to six metres (20 feet) off the ground in places, putting you right up in the tree canopy.

The elevated walkway winds around large native Tawa trees several hundred years old, through tangled vines and native plants, before lowering back down to ground level and exiting alongside a peaceful stretch of the Ngongotaha Stream.

Many of the native trees and plants are easily identified with signage - telling of the traditional uses by the Maori people and numerous other interesting facts.

Wild native birds like Tui, Bellbirds, Fantails and Pigeons frequent the bush around the treetops walk.  Bird snares (Waka Kereru or Pigeon trough) that were once used by the Maori to attract birds to be captured and eaten, are now used as feeding troughs to attract them further. 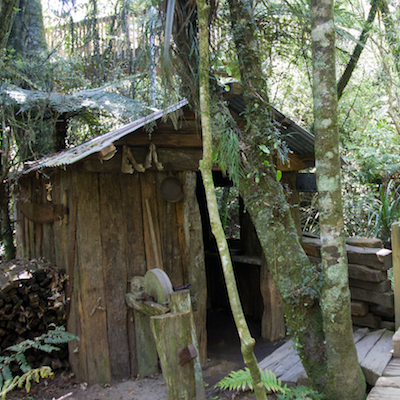 You'll find a few huts around our park, and our treetops area is home to the deer cullers hut and also the post-splitters hut.

The replica post-splitters hut is what bushman would have lived in deeper in the bush of the Mamaku Ranges that edges onto Paradise Valley Springs.

The men that lived near here in these types of huts would have been splitting native Red Beech and Totara timber into fence posts, fence battens, mine shafts and firewood.  This was done mainly by hand using a maul (like a very large hammer) and wedges.

This hut is made out of native Totara posts which is a timber that lasted very well in the ground prior to the availability of timber treatments.