How the Elevated Treetops Walkway was built

The Elevated Treetops Walkway took 10 months to construct - virtually by hand. The job was made more difficult due to very limited access and boggy conditions.

Before construction could begin, a temporary gangplank bridge was placed accross the Ngongotaha Stream using a crane to allow foot access to the site. There is no vehicle access whatsoever.

The first task was digging holes down to bedrock for the foundations - in extremely boggy ground, amongst large rocks and tree roots. This was done using hydro excavation (high pressure water to cut through the earth), combined with a vacuum to remove the water and soil slurry. Due to underground water springs, one hole opened up so large, a helicopter was needed to carry in about 100 wheelbarrow loads of earth to fill it.

Metal barrels were then stacked on top of eachother inside the holes to keep the dirt from slipping in. After water was pumped from the holes, concrete was poured in for the foundations and seven metre long poles weighing 250 kilos each were carried in by hand and bolted upright to the dried concrete.

In keeping with the look of the rest of our park, wood (Pine) was put to much use on the boardwalk - for beams, joists, braces, handrails and the walkway.

Railway sleepers were used extensively to form staircases both leading up to and again off the high walkway, before a dark concrete path was laid following the contour of the Ngongotaha Stream towards the exit. 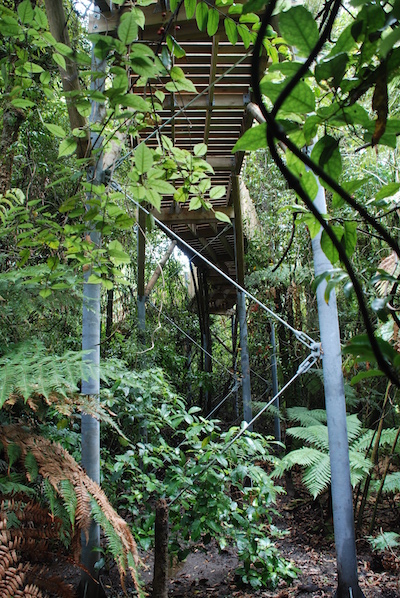